Marcy Balunas, an assistant professor in the School of Pharamcy, has extracted a novel cancer-fighting compound from blue-green algae. 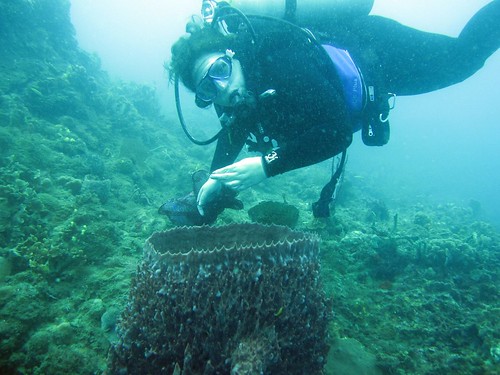 Human beings have been using wild plants to cure their ills for thousands of years. While much of the focus has been on the medicinal properties of terrestrial plants, one UConn researcher is exploring a new frontier.

Marcy Balunas, an assistant professor of medicinal chemistry in the School of Pharmacy, specializes in marine natural products drug discovery, which is the study of compounds obtained from marine organisms, such as algae, bacteria, and invertebrates.

“As a society, we have spent many centuries looking at terrestrial plants, but a relatively short time looking at marine life,” says Balunas, who has a primary appointment in the Department of Pharmaceutical Sciences and a joint appointment in the Department of Marine Sciences. “Most of the compounds we’re seeing from the marine environment are new, exciting, and of really strong potency.”

Balunas recently filed provisional patents for a novel compound called santacruzamate A, which she and her research team extracted from blue-green algae, also known as cyanobacteria. The algae thrive in the reefs of the Coiba National Park, a UNESCO World Heritage Site on Panama’s Pacific coast.

Santacruzamate A appears to have strong cancer-fighting properties and a structure similar to SAHA, a clinically-approved cancer medication commercially available under the trade name Vorinostat. However, initial tests show that santacruzamate A is 1,000-fold more active than SAHA in its ability to inhibit the histone deacetylase (HDAC) enzymes that are over expressed in cutaneous T-cell lymphoma and other cancers. Santacruzamate A also appears to be more selective in attacking only certain classes of HDAC enzymes, so that its application may be safer, with potentially fewer side effects.

Balunas’ research team initially tested the compound against tropical diseases and found it wasn’t very active. It wasn’t until Balunas attended a seminar where a presenter showed the structure of SAHA (suberoylanilide hydroxamic acid) that she recognized santacruzamate A’s similarities and decided to test it in cancer assays. She was fortunate that UConn medicinal chemistry professor Amy Anderson happened to be working on HDAC-related research at the time and agreed to run santacruzamate A through her assays. The rest, as they say, is history.

“There is a lot of excitement around this compound,” says Balunas, who is discussing potential marketing options for the new compound and its derivatives with the University’s Center for Science and Technology Commercialization.

The santacruzamate discovery was a poignant one for Balunas, who lost her grandmother and mother to cancer.

Balunas’ mother was diagnosed with breast cancer when she was working toward her master’s degree in plant ecology at the State University of New York College of Environmental Science and Forestry. Balunas, who had lost her father five years earlier, took time off to be her mother’s caregiver and watched helplessly as the breast cancer metastasized to her mother’s brain. After her mother’s death, Balunas vowed to search for treatments that could help others who are diagnosed with cancer.

“I moved from this abstract idea of plants as medicine to ‘let’s look at plants for fighting cancer, and let’s see if we can have an influence on cancer using plant-based medicine,’” she says.

From tropics to glaciers

Balunas’ interest in marine life began while she was working for the Scripps Institution of Oceanography as part of her post-doctoral training in marine natural products drug discovery. She spent three years living and working in Panama, searching for anti-cancer and anti-malarial compounds in the waters of the Pacific Ocean and Caribbean Sea.

Balunas continues to conduct research with the Smithsonian Tropical Research Institute and the International Cooperative Biodiversity Group (ICBG), which has been searching the fertile grounds of Panamanian oceans and forests since the early 1990s. Several potentially novel lead compounds have been discovered, in addition to santacruzamate A.

“Our work in Panama and exploration of potential drug leads from marine cyanobacteria and other microorganisms has been a tremendously productive effort, with quite a number of high impact discoveries and other contributions,” says William H. Gerwick, principal investigator for the ICBG research currently ongoing in Panama and Balunas’ mentor for her postdoctoral research.

“Marcy’s work with the discovery of santacruzamate and subsequent development of the lead through her work at UConn has become a ‘flagship’ discovery for our team and to an extent, the entire ICBG program,” says Gerwick, a distinguished professor of oceanography and pharmaceutical sciences at the University of California at San Diego. “I think there is every reason to be optimistic that this will continue to be an important scientific lead, and perhaps, provide a new class of therapeutics for cancer and other proliferative diseases.”

Balunas is currently working with collaborators around the world on potential natural product compounds to combat malaria, leishmaniasis, Chagas’ disease, and cancer. She also has active collaborations within the UConn community, including with associate professor of molecular and cell biology Adam Zweifach on potential compounds addressing inflammation and autoimmune diseases and with associate professor of nutritional sciences Jiyoung Lee on the search for modulators of obesity-related inflammation from edible blue-green algae.

While much of her time is currently devoted to the advancement and development of santacruzamate A, Balunas is also researching the potential medicinal properties of natural compounds lifted from the bacteria that are associated with tunicates – also known as sea squirts – which are arguably the closest invertebrate relatives to humans. She routinely collects tunicates in Long Island Sound with divers from UConn’s marine sciences program at Avery Point. She also collects them in Panama and Alaska.

In addition, Balunas is exploring the therapeutic potential of cold-obligate bacteria called psychrophiles found on and near glaciers in Alaska.

“The glaciers are really new for us,” she says. “We take ice, meltwater, soil, and moss from the glaciers and try to grow their bacteria in the lab to test them for the disease properties we’re interested in. No one really does that.”