Comey spoke about the importance of ethical leadership as a basis for making sound decisions. 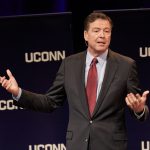 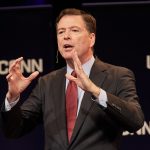 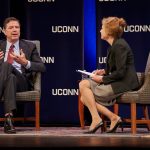 James Comey, former director of the Federal Bureau of Investigation from 2013 to 2017, spoke Monday at UConn. Drawing on his career in American politics and interactions with three U.S. presidents, he focused on the importance of ethical leadership as a basis for making sound decisions and called upon students and their generation to make a difference.

His appearance was part of the Fusco Contemporary Issues Forum, a series of lectures sponsored by the Fusco family of New Haven to bring outstanding scholars, leaders, and policy-makers to campus.