Many movies we see now include computer-generated images of dragons, aliens, castles, or other fantastical things that can transport us into another reality – a far cry from where we were a few decades ago with films like “Jaws” or “Star Wars” featuring less-than-convincing creatures and special effects.

Just as movies are evolving, so is the field of film making to include new opportunities to create video content for the web and social media.

As a consequence of digital technology, including the ubiquity of social media, there are tremendous career opportunities in these fields, including here in Connecticut. — Matthew Worwood

A revitalized program, Digital Media CT 2018, is working to address critical workforce development needs and respond to the film industry’s needs. Led by Matthew Worwood, Heather Elliott-Famularo, and Michael Vertefeuille from UConn’s Department of Digital Media and Design, Digital Media CT 2018 is funded by a $150,000 grant from the Connecticut Economic Resource Center.

In 2008, the state of Connecticut established the Film Industry Training Program to help young professionals entering the field develop the skills to work in the ever-evolving world of film and digital media.

Ten years later, the program, which was re-launched in 2015 as a collaboration with the University of Connecticut, is embracing its role as a state-wide initiative to connect digital media talent to careers around the state.

“I think people can sometimes think of film, television, and digital media, and somehow connect it to that starving artist stigma,” Worwood says. “As a consequence of digital technology, including the ubiquity of social media, there are tremendous career opportunities in these fields, including here in Connecticut.”

These exciting developments in the field are exactly what inspired the creation of the Digital Media CT (DMCT) program and has continued to fuel its expansion.

The program has helped catalyze the growth of Connecticut’s film industry since its inception a decade ago, but it was not until the program re-launched with UConn that it began emphasizing digital media skills that are critical to anyone looking to enter the field today.

DMCT’s ConnectNext series features workshops and hosts speakers, which help promote the thriving industry in the state and connects hundreds of newly trained graduates and students to job opportunities in their field in Connecticut. 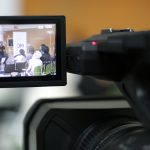 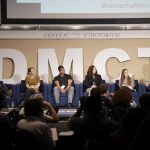 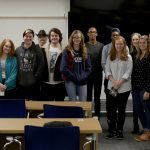 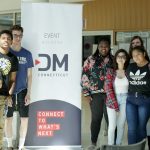 “As the state university of Connecticut, we have a commitment to do what we can in the Department of Digital Media & Design to help build the creative economy within the state,” Elliott-Famularo says. “Graduating students with the needed technical, aesthetic, and leadership skills will help to fill jobs – with Connecticut residents – and feed the growing film/digital media industry and let corporations know that they don’t have to look outside the state to find creative talent.”

ConnectNext workshops focus on relevant topics including motion graphics, game design, virtual reality, and social media management. These bi-weekly workshops are being held in Stamford and Hartford. The workshops will benefit high school students and recent college graduates with an interest in digital media, film, television, and other related fields.

There will also be a state-wide summit at UConn Stamford, which will promote digital media career opportunities in the state’s entertainment and business sectors.

“The state has tremendous opportunities in film, television, and digital media,” Worwood says. “High school students can pursue relevant degrees at Connecticut’s higher education institutions, and then secure employment upon graduation. Digital Media CT is designed to support this talent pipeline by connecting students to their next steps in these growing fields.”

Matthew Worwood is associate director of UConn Digital Media & Design and a doctoral student at Johns Hopkins University. As a research practitioner in the learning sciences, Worwood’s past work includes the documentary “Creativity in Education: Exploring the Imbalance,” collaborating on the design and development for the Academy of Digital Arts and Sciences, and founding the Connecticut Student Film Festival. More recently, Worwood co-founded the Class of 2032 project where he produced the film “Class of 2032: Schooling for a Digital Culture.”

Heather Elliott-Famularo is the new department head and Donna Krenicki Professor of Design and Digital Media, who joined UConn in January 2018. She is an award-winning documentary filmmaker and digital artist and holds an MFA in art & technology from The School of the Art Institute of Chicago and a BFA in art media studies-computer graphics from Syracuse University.

Michael Vertefeuille joined the UConn faculty in 1992, and since then he has worked in several capacities at the University, including teaching and as the assistant dean in the School of Business. He is currently the associate department head in the Department of Digital Media and Design. His current area of research is emerging technology with a focus on the internet of things, rendering systems, computer vision, 3D projection mapping, and wearable electronics.