Thomas C. Katsouleas, a leading plasma scientist and engineer with deep academic roots in teaching and research, has been appointed the 16th president of the University of Connecticut.

UConn’s Board of Trustees unanimously confirmed his appointment Tuesday at a special meeting, capping a highly competitive six-month national search. His term as president begins Aug. 1, 2019. 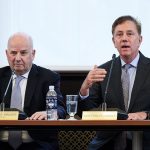 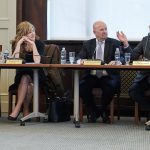 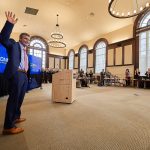 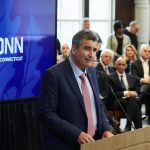 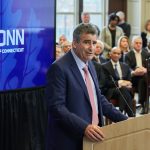 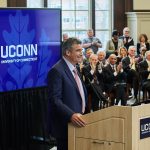 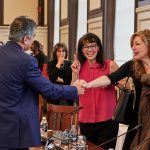 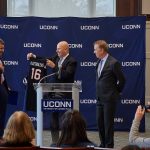 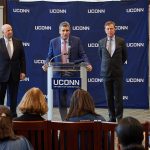 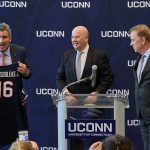 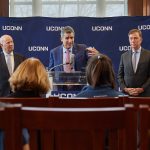 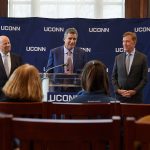 Katsouleas, who is currently executive vice president and provost of the University of Virginia, comes to Connecticut with the endorsement of Gov. Ned Lamont, who welcomed Katsouleas on Tuesday before an enthusiastic crowd in the Wilbur Cross Building.

“UConn is a vital piece of Connecticut’s economic engine, and I look forward to working with Tom in ensuring that the university and our state’s economic development team, large corporations, small businesses, and start-ups alike are working together to help develop a pipeline of talent and an environment that supports business development and economic growth,” Lamont said.

“Tom’s reputation is one of advocacy and relationship-building, a key attribute for the president of our flagship university,” he added. “I look forward to connecting him with business leaders, our agency commissioners, members of the nonprofit and advocacy community, and others as we work toward a Connecticut that is forward-thinking, strategic, and welcoming to new graduates, businesses, and entrepreneurs alike.”

Katsouleas has been executive vice president and provost at Virginia since 2015, having been appointed to the position after serving for seven years at Duke University as the dean of the Pratt School of Engineering and professor of electrical and computer engineering.

He was among more than 200 applicants for the position, which President Susan Herbst is leaving this summer when her contract ends after eight years in the job.

He plans to spend a significant amount of time in Connecticut in the coming months to prepare for the job, working with Herbst and others to prepare for a smooth transition.

“Tom is clearly the right candidate at the right time to lead UConn forward, and we are delighted he has decided to come to Connecticut,” Board of Trustees Chairman Thomas Kruger said Tuesday.

“He has a deep and comprehensive understanding of what makes a major research university work and what success looks like. We were drawn to Tom’s vision of what the future of UConn can be and how we as a university can work with the Governor and his administration to help support the Governor’s economic vision for the state,” Kruger noted.

“We are confident in Tom and his ability to work closely and effectively with our Governor, the board, the General Assembly, our faculty, staff, students, alumni, and donors. He knows the vital role UConn plays in the life of our students and faculty, and for the economy, workforce, culture, and communities of our state,” he added. “We are pleased with our choice, and we are excited about it.”

He was a researcher and faculty member at UCLA for seven years after receiving his Ph.D., before joining the University of Southern California faculty as an associate professor of electrical engineering in 1991, becoming full professor in 1997. He also was an associate dean of USC’s engineering school and vice provost of information technology services.

Katsouleas is a leading scholar in the field of plasma science and has authored or co-authored more than 250 publications. He has deep roots in academe, having served a term as president of the Faculty and Academic Senate at USC during his time in its engineering school.

He is a fellow of the American Physical Society and the Institute of Electrical and Electronics Engineers (IEEE). While at Duke, he also created the Grand Challenge Scholars Program of the National Academy of Engineering (NAE), a program now emulated at more than 120 universities across the U.S. and in several countries around the world.

Katsouleas’ wide portfolio of responsibilities at Virginia complement the work he will take on at UConn, with both schools featuring a rich array of academic degree programs, large academic medical centers, competitive NCAA Division I athletics teams, and esteemed professional schools.

“I’m honored and humbled to be appointed president of the University of Connecticut, one of the most outstanding public research universities in the nation and one of Connecticut’s greatest assets,” Katsouleas told trustees on Tuesday.

“I want to thank you for placing your confidence in me. I will spend each and every day working to justify that confidence and meet your expectations in the years ahead,” he said.

Among his many goals at UConn, Katsouleas expects to focus strongly on supporting innovation, enhancing the University’s connections with alumni and philanthropic supporters, and capitalizing on the state’s investments to aggressively expand UConn’s impact on the economy and innovation.

“One of my highest priorities is to grow research at UConn. That means making strategic investments in faculty and facilities with the goal of doubling research here over the next seven to 10 years,” he said.

“Good public universities are pillars supporting their state – serving its needs and supporting its economy,” he added. “Great flagship universities with their satellite campuses and partners, including state and community colleges, are the crown jewels of the state – uplifting the mind and spirit not just of their own students, but of the surrounding communities and the entire state.

“That is what we are here to do, and I’m incredibly proud to contribute to that mission.”

As the top academic officer at Virginia, Katsouleas currently leads six undergraduate and six professional schools with enrollments of more than 16,000 undergraduates and more than 6,700 graduate students. In addition to focusing on the research and academic enterprises, he has a special interest in ensuring the quality of the student experience through ensuring diversity, shared values of respect and responsibility, and recruiting highly talented faculty whose backgrounds reflect those of the students they teach.

“The University of Connecticut has made a fantastic choice, and I am excited for Tom as he takes on this next challenge,” University of Virginia President Jim Ryan said. “For the past four years, Tom’s responsibilities have been both vast and varied, and he has handled them with grace and kindness. Tom has also been incredibly generous to me over the past year, and it has been a joy to work with and learn from him. I look forward to watching him make an even bigger difference in his new role.”

Katsouleas is also passionate about teaching and the value of designing courses in ways that help students learn in authentic, experiential ways that best prepare them for transitioning their knowledge later into successful careers.

Teresa A. Sullivan, Virginia’s president emerita, congratulated UConn on selecting Katsouleas, who she described as “well positioned to offer a vision and strong leadership as president.

“Tom combines a strong research and teaching background with a principled approach to administering higher education.  He is unafraid of challenges, whether they be intellectual or organizational,” she added.

Katsouleas has welcomed challenges in all aspects of his life even before his academic career, be it pushing himself in athletics or perfecting the intricate research involved in plasma science and the related fields in which he has distinguished himself.

As a college junior, he transferred from Santa Monica Community College to UCLA – where he ended up being late to his first calculus midterm, immediately dropped his pencil, and could only listen helplessly as it rolled away down the sloped floor, and eventually ended up with an “F.”

In his spare time, Katsouleas enjoys sailing, swimming, surfing, water skiing, and other water sports. In fact, the former ocean lifeguard has jokingly noted that he competed “briefly, proudly, and ingloriously” as a student-athlete playing water polo during his college days.

He’s also been known at past universities to scoot across campus on his personalized skateboard, explore the surroundings by motorcycle, and is as comfortable discussing plasma physics as he is catching a wave.

“I look forward to bringing to the UConn presidency an ambitious agenda, a lot of energy, and my skateboard,” he said.

Katsouleas’ resume, high-resolution downloadable photos, and other information are available at: presidentdesignate.uconn.edu

Katsouleas will be UConn’s 16th president. Meet all 16, going back to the University’s founding in 1881, in this video.

Associated Press Incoming UConn President has Business to Attend to