'This trip is really important for our students to see first-hand how the spirit of entrepreneurship works in a real setting,' said UConn's David Noble.

A group of UConn students who are members of the Werth Institute for Entrepreneurship and Innovation are taking advantage of this week’s Spring Break to visit a number of companies in the Silicon Valley area.

The trip is giving the students a first-hand look at one of the most prominent areas of the country where companies are developed and brought to life. 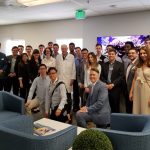 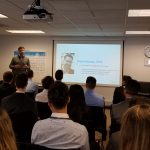 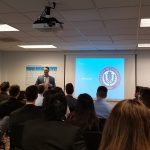 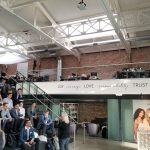 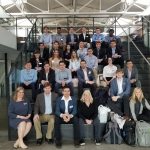 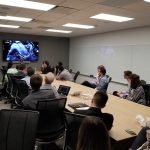 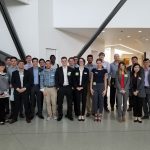 They are led on this journey by David Noble, the director of the institute, which was founded in 2017 through the generosity of Peter J. Werth. The Institute brings together student and faculty programs fostering entrepreneurship and innovation that potentially have commercial application and can be used to create new companies.

“This trip is really important for our students to see first-hand how the spirit of entrepreneurship works in a real setting like California,” said Noble. “It gives them networking opportunities to present their ideas to leaders of businesses.

“When we founded the Werth Institute, a trip like this was something we talked about with the UConn Foundation and we have worked together to make it happen.”

The group left on Monday, March 18 and will return to Connecticut on Friday. Along the way they are visiting the Fogarty Institute for Innovation, which explores medical advancement, the headquarters of Yahoo, computer game developer Nvidia, and PROCEPT BioRobotics, a robotics company that develops transformative solutions in urology.

There was also a reception with UConn alumni and benefactors in the Bay Area on Monday night.

Two other companies the group visited are led by UConn graduates working at Earlens and Madison Reed.

Earlens has developed hearing aids that use vibrations on the eardrum as opposed to simply enhancing noise, and is led by president and CEO William Facteau ’92 (CLAS), who was a student-athlete in football at UConn.

“I have been really excited to reconnect with UConn over the past few years,” said Facteau. “It’s really important for UConn to establish a presence in this area of the country where so much development is happening.”

Madison Reed is a start-up hair product company led by CEO and founder Amy Errett ’79 (CLAS), who is also a member of the UConn Foundation Board of Directors.

“The state of Connecticut needs more starts-ups, more commerce, and more job creation,” said Errett. “So I think getting the exposure to UConn graduates like myself is really important. They will see how we create jobs, satisfy customers, and have a little fun along the way.

“These careers are not for everyone,” she added. “They are hard work and incredibly risky. The students have seen that on this trip.”

The student experience on the trip has been varied, as some had never been to the West Coast before while others are well traveled and have already started their own companies.

“I like entrepreneurship, because I can build a product and see people use it, instead of sitting at a desk and coding away,” said Aakash Balaji, a junior computer science and engineering major from Rocky Hill, Connecticut.

Balaji has been part of several start-ups on campus, including “Follow” – a way to aggregate all of a person’s social media accounts into one app – and “Fit Trek,” an app where a user’s insurance company would get a notification every time they exercise, in hopes of getting a lower rate.

“I’ve tried to meet as many people as I can on this trip,” said Balaji. “I am pitching ‘Follow’ to a number of people.”

Carlie Cassells is a sophomore nursing major from Mansfield, Connecticut, who became interested in the Werth Institute by living in the Public Health House, a learning community also located in the Werth Residence Tower.

“I’ve always known I wanted to do nursing, but not necessarily in a hospital setting,” said Cassells. “I have a passion for working with people with disabilities. Somehow, I want to merge the two and specialize in mothers with special cases, like where the mother has a disability or the child is going to be born with a disability.”

Cassells is currently pitching the idea of a clothing company that alters the product for people with disabilities to UConn’s Connecticut Center for Entrepreneurship and Innovation in hopes of landing a summer fellowship.

“I’ve never been to any place out West, so it’s exciting to see a new place, but in terms of what we are doing, I am excited to visit some headquarters of actual people in the field directly,” said Cassells. “It’s a humbling experience to talk to people who are really out there, when I am just a sophomore, but it’s also impressive and inspiring to meet them.”