In June, President Trump promised that his administration would work to deport “millions of illegal aliens” from the U.S. via increased Immigration and Customs Enforcement (ICE) raids and a ramping up of Border Patrol agents. 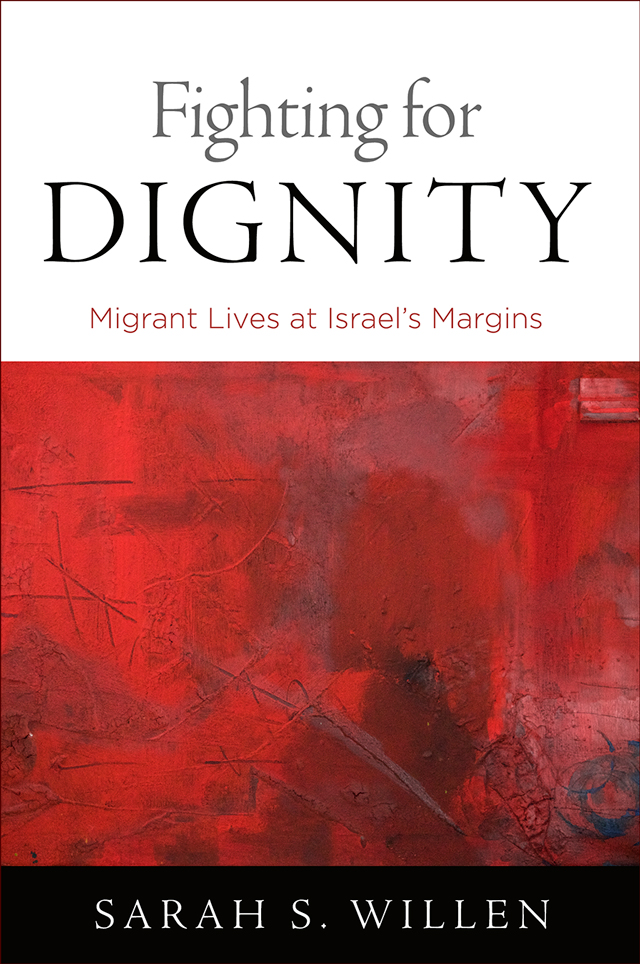 The book, titled Fighting for Dignity: Migrant Lives at Israel’s Margins, draws on Willen’s ethnographic fieldwork and personal relationships with migrants in Tel Aviv, Israel. In it, she shares stories of people’s lives: their migration experiences, and their daily struggles as migrants, but also as parents, friends, employees, parishioners, and community members.

“Beyond just struggle or suffering, the book gives voice to the hopes, dreams, and desires of the people I came to know,” she says. “It also explores how ideologies and government policies create dividing lines, and how they impose ideas of inclusion and exclusion.”

After the Second Intifada in 2000, military closures on the West Bank meant that Palestinians, who were vital to the Israeli workforce, could no longer get to their jobs. So, the government granted companies permission to recruit migrant workers from Thailand to work in agriculture, and from Eastern Europe and China to work in construction.

Other major sources of migrants were Filipino in-home caregivers, recruited to care for Israel’s aging population, and unauthorized migrants from Africa, South America, and elsewhere who came with Christian pilgrimage groups.

Between the mid-90s and early 2000s, Israel—especially Tel Aviv—changed because of these migrations. By 2002, unemployment was high. Prime Minister Ariel Sharon’s government estimated that there were about 300,000 unemployed Israelis and about 300,000 migrant workers.

“The announcements had sinister music and a voice that essentially said, ‘These migrants are a problem and they need to go,’” she says.

Willen had already been working with migrant communities in Tel Aviv for two years on issues of women’s reproductive health. But once the deportation campaign was announced, she shifted her focus. She spent time speaking with people in their homes, at parties, and in church services; attended community gatherings; and volunteered regularly at three advocacy organizations.

“Much of what I write about in the book is how the possibility of arrest and deportation was ever-present, and how it led people to move differently through space, plan their time differently, and take on a deeply embodied sense of vigilance,” explains Willen.

A migrant who, for example, needed to take two different buses from her home to a neighborhood where she regularly cleaned houses, would steel herself against exposure on public transportation during rush hour. At first, says Willen, people could breathe a little easier on Fridays and Saturdays—the Israeli weekend. But then the police started arresting on weekends.

Community leaders, including pastors, and men, were targeted for deportation, with the strategy of unraveling community networks and stranding women and children, she says, adding that about 40,000 people were deported, and 100,000 others left as a result of intimidation. During the deportation campaign, the immigration police even cultivated informants, who left marks in permanent marker on the doors of people’s apartments and homes.

Over time, not only did communities collapse, but many Israelis began to internalize and believe the government’s xenophobic messages, says Willen.

Since the Second Intifada, private companies have made billions of dollars charging recruitment fees—often illegally—to bring workers from China, the Philippines, Eastern Europe, and elsewhere, says Willen. But if their employers violate the contract, or a job falls through, the migrants are cast as “illegal,” not the recruitment agencies, she points out, likening the situation to the U.S. agricultural sector.

In 2007, another wave of migrants—this time asylum seekers from Sudan and Eritrea—began settling into the same Tel Aviv neighborhoods. Despite a short-lived moment of empathy for refugees from Darfur, the idea that the country should be for people who are Jewish persisted, she says.

“Today these neighborhoods are home to thousands of political refugees, who are more vulnerable and less capable of integrating because of the traumas from political conflict in their home countries and the harrowing journeys that followed,” Willen says.

Willen’s book points out that Israeli leaders seem to miss historical lessons from the discrimination, oppression, and genocide perpetrated against Jewish people.

But Willen says that increasing numbers of Israeli activists work in human rights groups to provide social welfare and medical services to migrants. Willen conducted fieldwork at three organizations, including a hotline for migrants, a clinic, and a municipal aid organization, to understand the activists’ motivations.

Willen points out that the Israeli shift to anti-migrant policies parallels current U.S. policies, the rise of nationalism and the criminalization of immigration. She proposes that people think more about how migrants are part of larger systems, like the caregiving industry in Israel and the agricultural industry in the U.S.

“Migrants are absolutely integral to the economy as we know it,” she notes. “They are woven into the social fabric of society as well.”

Most migrants do not cross borders because they have criminal tendencies, and treating them as criminals only serves to cripple their lives and their ability to contribute to society, says Willen.

“They seek opportunity, and often safety, elsewhere precisely because their deepest goals, values, and commitments are on the line,” she says. “Their commitments to family, to religious faith, to personal integrity, to living a flourishing life—a life of meaning and dignity.”