Laura Doherty is currently in the middle of an incredibly rigorous program at UConn Health - and wait until you hear what she does to “relax.”

Laura Doherty is currently in the middle of an incredibly rigorous program as a UConn Health student … and wait until you hear what she does to “relax.”

Doherty is a little over halfway through her academic work in Farmington, which will see her earn both a dental degree and a doctorate in biomedical science with an emphasis in skeletal biology and regeneration. It is an eight-year program that she started in 2015 and plans to complete in 2023.

“I remember when I was applying to the program, and my family and friends that I spoke to told me I was crazy,” says Doherty. “It was a really daunting experience at first, and the first year was pretty scary, but in everything I do, I always remember the end goal.”

Her outside passion could also be described as daunting and difficult, but with an end goal in mind – obtaining a private pilot’s license, which she earned in January.

“I was always interested in flying because I had family in Alaska, and when we used to visit them we had to take small planes,” says Doherty of trips to visit her uncle and aunt, Bob and Karin Halpin, who lived in Halibut Cove – with a population of less than 100.

Doherty, who earned her undergraduate degree from the University of Pennsylvania, reached out to a flight school at Hartford-Brainard Airport and found “the most amazing instructor” who was willing to work around her demanding academic schedule.

Her testing included a written test and a check ride with a representative of the Federal Aviation Administration. During training, she was required to do at least 45 flight hours with an instructor, in such areas as takeoffs and landings, learning air traffic control communications and night flying. Doherty earned her license flying a Cesna 172, which is a four-seat, single-engine, high-wing plane. 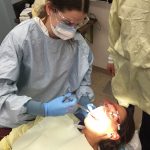 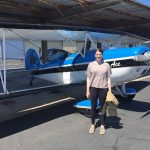 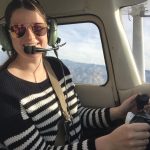 “The academic program I am in is so long and difficult that I need to focus on something outside of school,” says Doherty. “With the way that I am, I need a goal or a challenge. That’s what really made me stick with the flight training even thought I was in the middle of my Ph.D. program.”

The first two years of her student program are spent with medical school training, followed by three years of the doctorate and two years of dental school. Doherty will do a residency after the program and plans to spend her career in academia and research.

“Laura has great determination and lives in the spirt of joie de-vivre, the joy of living,” says Dr. Archana Sanjay, the program director of the Skeletal Biology and Regeneration Graduate Program at UConn Health. “She is very well-read and strives to be up-to-date with the published literature. This helps her in designing experiments, interpreting data and writing.”

Doherty joined Sanjay’s laboratory in 2017 to investigate ways to improve fracture healing. She received the received the American Society of Bone and Mineral Research Young Investigator Award in 2019.

Doherty believes that learning to fly gave her self-confidence, which transferred to other parts of her life, including school.

“Flying a plane is more about the controls – it really requires preparation, accurate planning, situational awareness, communication skills, and always making the safest decisions,” says Doherty. “I knew that once I got my first endorsements to fly solo to other airports that I was truly competent and it was not a mistake. School doesn’t always come with such clear cut markers of progress.”

Doherty is a member of Women in Aviation International and the Connecticut Ninety-Nines, both of which host events to encourage more women and girls to learn how to fly.

To date, she has flown in and out of 23 different airports in the Northeast from upstate New York to New Hampshire and out to Cape Cod. Doherty plans to continue her pilot training and earn more endorsements and ratings.

“I am doing tailwheel training right now and it’s very challenging, but that’s the point,” says Doherty. “I think it’s really important to have hobbies and real passions so that you could split your world up into two different phases: school and fun.”