A team of UConn students across various majors has competed production on a documentary film entitled “Locked Out: American Dream in Jeopardy."

A team of UConn students across various majors has completed a documentary film entitled “Locked Out: American Dream in Jeopardy.” The documentary tells the story of the undocumented immigrant community in Connecticut and the activists who are helping them adjust to life and navigate the legal system to find a path to citizenship.

“It was a real joy to work with these students on this project and it was a real learning experience for them,” says Steven Smith, a professor of visual journalism who guided the students along with Scott Wallace, another professor in the Department of Journalism. “They had to trust us because this was a tough story to work on. When you are working on a documentary, it is different because the script is being written as you are doing the interviews. That takes a lot of trust the first time you go through that process. Scott and I both wanted to inspire them about long-term projects and the difference that these stories can make.”

The film features interviews with U.S. Senator Richard Blumenthal, New Haven-based immigration attorney Glenn Formica, and Sister Mary Jude Lazarus, a Roman Catholic nun who serves the Hispanic community in Willimantic. Adding to the power of film are the words of an undocumented immigrant identified as “Margarita” out of her concern not to be known and Eric Cruz-Lopez, a DACA community organizer in New Haven.

“Margarita was a very important person in this film,” says field producer Daniela Luna ’20 (CLAS), a political science and journalism major from Manchester. “She has a very powerful story and is very open, which is uncommon for people that have crossed the border. They usually don’t want to talk about it.”

Wallace says Sr. Lazarus was a “keystone” person in the project and one of the first people that the group contacted. Lazarus offered suggestions on people that should be interviewed and allowed the crew to be present as she was meeting with undocumented people. 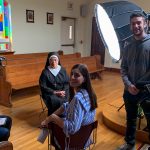 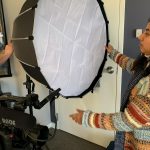 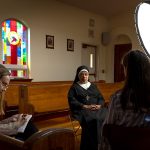 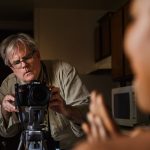 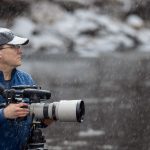 Locked Out, American Dream in Jeopardy
Steven G. Smith is a still/motion photographer and UConn professor of visual journalism at the University of Connecticut. Smith mentors students in the incorporation of cinematic principles into multimedia storytelling. 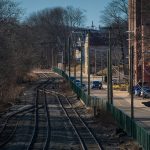 Locked Out, American Dream in Jeopardy
Nearby Willimantic, Conn., is prominent in the documentary. 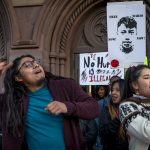 Locked Out, American Dream in Jeopardy
Eric Lopez leads a chant at a rally for an undocumented high school student detained by ICE in New Haven. Photo by Steven G. Smith

“I am so happy that the production turned out so well, but it was a huge learning process for many of us,” says Alethea Kavarnos ’20 (CLAS), a New Britain native who served as managing producer of the film, and graduated with a degree in journalism and political science with a minor in human rights. “Sometimes, we had to refilm the interviews and go back and do a lot of changes. We were all learning, but it got better and better. The final film is in a very different form from what we had in the beginning. It was really exciting to see that progression.”

The story of the undocumented immigrants was a challenging one to tell, and it tested the students’ emotions.

“We all learned so much not just about empathy, but ourselves,” says Kavarnos. “When we went to meet one of our earlier sources, they said to check our privilege. They had some serious reservations about working with us. They were worried we were coming in to sensationalize their story and exploiting it for our gain. They told us point blank, ‘how are you white people with blond hair and blue eyes going to tell our story?’ And they were right to have these fears. We wanted to make a story that helps people, but this is their life. We realized we had to be more sensitive and more empathetic. We had to show them they could trust us and that it wasn’t our story, it was theirs. That is one of the most crucial things we took away through making the documentary.”

Isaac Blimes ’20 (SFA) graduated with a degree in digital media and design and was the primary editor of the film. The editing work was done in the spring semester and most of the footage, including interviews, was shot in the fall before the COVID-19 pandemic hit.

“You are almost living someone else’s life when you are doing a documentary,” says Blimes. “With the times we are living in now, empathy is so important..something we should all strive for. Having students come together from different majors and produce a project on a community that goes through so much was so important. We can bring these stories back to our friend no matter what our career paths are and have them for the rest of our lives.”

The film, which can be viewed in full below, was recently selected for the Toronto Lift-Off Film Festival this summer. The festival is part of a global network of festivals based out of the well-known Pinewood Film Studios in the United Kingdom.