Agwunobi is a pediatrician by training who also holds an MBA and will be the first physician and the first person of color to lead the University. As interim president, he also will continue in his role as UConn Health’s CEO, a position in which he has served since 2014.

The UConn Board of Trustees unanimously selected Agwunobi at its meeting Wednesday, praising him as a highly effective, methodical, and level-headed leader who inspires trust and confidence with a determined yet compassionate approach to meeting challenges.

Although Agwunobi’s term officially starts July 1, the UConn Board of Trustees also granted him authority starting immediately to take on the position’s day-to-day responsibilities, noting that President Thomas Katsouleas will remain available and involved in assisting with the transition.

Agwunobi said Wednesday that the University’s most critical near-term priority is successfully reopening at nearly full capacity this fall, and that while much has been accomplished to achieve that goal, much more work is ahead.

He also pledged that other critical missions under way at UConn will continue unabated, such as updating the long-term academic strategic plan; growing research and innovation; expanding student access to mental health care and affordability; partnering with various constituencies on and off campus; promoting diversity, equity, and inclusion; and many others.

“Having been here in Connecticut at UConn Health for several years, I know how much UConn means to the people of this state and our faculty, staff, students, and alumni everywhere. For many, I know UConn is more than just an educational institution or an employer, but an important part of their lives and their personal histories. It is fundamentally part of our identity as a state,” Agwunobi says.

“UConn also of course plays a vital role in fueling Connecticut’s economy and its workforce. And we know we are not just graduating workers, we are graduating citizens, leaders, thinkers, and innovators of the future for Connecticut and beyond,” he says.

“Given these high stakes, all of us who are fortunate enough to be here are driven – and I certainly am driven - to do all we can to ensure the continued success of this institution as we carry out its mission both in Storrs, in Farmington, and on each of our regional campuses, and beyond,” he says.

The University plans to undertake a search for President Katsouleas’ permanent replacement, but does not plan to start that process in the near term and will decide later about its timing.

Agwunobi, colloquially known to many as “Dr. Andy,” has been responsible for UConn’s $1.2 billion academic health system in his role as CEO of UConn Health, which includes a teaching hospital, medical and dental schools, research facilities, and other initiatives.

As UConn’s interim president, he will also oversee the $1.4 billion academic and research initiative at UConn Storrs and its regional campuses in Hartford, Stamford, Avery Point, and Waterbury.

In his time as CEO of UConn Health, Agwunobi has grown its revenue an average of 10 percent per year; led a comprehensive turnaround that improved operational and financial performance by tens of millions of dollars; and oversaw $800 million in construction that includes the new teaching hospital, Outpatient Pavilion, Research, and other buildings.

He also oversaw the successful implementation of the $100 million Electronic Medical Record installation; partnered with deans in hiring more than 60 new faculty per year for last three years; and led the “One UConn” strategy at UConn Health, centralizing shared functions across campuses.

“Anyone who has worked with him or watched him guide that institution forward, particularly through the last 15 months of COVID, has seen a master class in leadership,” says UConn Board of Trustees Chairman Dan Toscano.

“He is bold when boldness is needed, cautious when caution is the wisest choice, and methodical in all things,” Toscano says, adding that Agwunobi “has demonstrated that he can interact with board members, donors, and legislators as easily as he can with faculty, staff, and students.”

Sanford Cloud Jr., a UConn trustee and chairman of the UConn Health Board of Directors, was among several trustees who praised Agwunobi as an ideal choice.

“He’s an extraordinarily talented leader: inclusive in his leadership style, transparent in his decision making, a person of high integrity, and someone who works well and engages well a diverse set of stakeholders within the university setting,” Cloud said.

Agwunobi was born in Scotland and received his medical degree at the University of Jos in Nigeria, performing his surgery clinicals in Dundee, Scotland, and his pediatric residency at Howard University Hospital in Washington, D.C. He also holds an MBA from the Stanford Graduate School of Business, and worked nights and weekends in practice at the Palo Alto Medical Foundation during his MBA studies.

Prior to UConn Health, he served in several high-profile roles including as president and CEO of the Grady Health System in Atlanta; CEO of Providence Healthcare in Washington state; and Secretary of the Florida Agency for Health Care Administration, in which he was responsible for Florida’s $16 billion healthcare administration budget including Medicaid, as well as regulatory oversight of Managed care programs, home health care and hospitals.

Agwunobi also previously served as a managing director and co-leader of the health care financial and operational performance improvement practice of Berkeley Research Group (BRG), the sixth-largest healthcare consulting firm in the U.S.

He also has served as CEO of the 14-hospital St. Joseph Health System in California, and president and CEO of Tenet South Fulton Hospital in East Point, Ga. As a pediatrician, he has practiced on both coasts including at Harvard Vanguard Medical Associates in Boston, and Palo Alto Medical Foundation in California.

Agwunobi is a published author of two books: “An Insider’s Guide to Physician Engagement” (2018 Health Administration Press, Chicago) and “An Insider’s Guide to Working with Healthcare Consultants” (2019 Health Administration Press, Chicago).” He also has been named to many lists of top healthcare leaders in regions where he has worked, and was named in 2007 as one of the 50 Most Powerful Physician Executives nationwide by Modern Healthcare magazine.

Trustees had high praise Wednesday for Agwunobi, noting his successes at UConn Health and the wide regard in which he is held throughout the University.

“What jumps out at me about Andy’s style is that he treats people with such dignity and respect,” says trustee Andy Bessette. “All of his staff and the students there (at UConn Health) respect what he does, and I’m so proud to have him as our interim president.”

To Agwunobi, he added: “I know you’re going to bring all of those same skills to this position, because that’s who you are.”

Paul Mounds, Chief of Staff to Gov. Ned Lamont, said the governor strongly supports Agwunobi’s appointment to the position and that he is respected at the state’s executive levels as well as in the University.

“I have personally known Dr. Agwunobi for many years and I couldn’t say any clearer or better than what (Toscano) said about his leadership, his class and his focus on public service as well,” Mounds said. “He will serve this university greatly, and we look forward to working with you and supporting you, not only from the Board of Trustees level, but also from the Executive Branch and Governor’s Office.”

Looking for a headshot of Dr. Andrew Agwunobi? Below you will find high-quality images that can be used for publication or distribution. 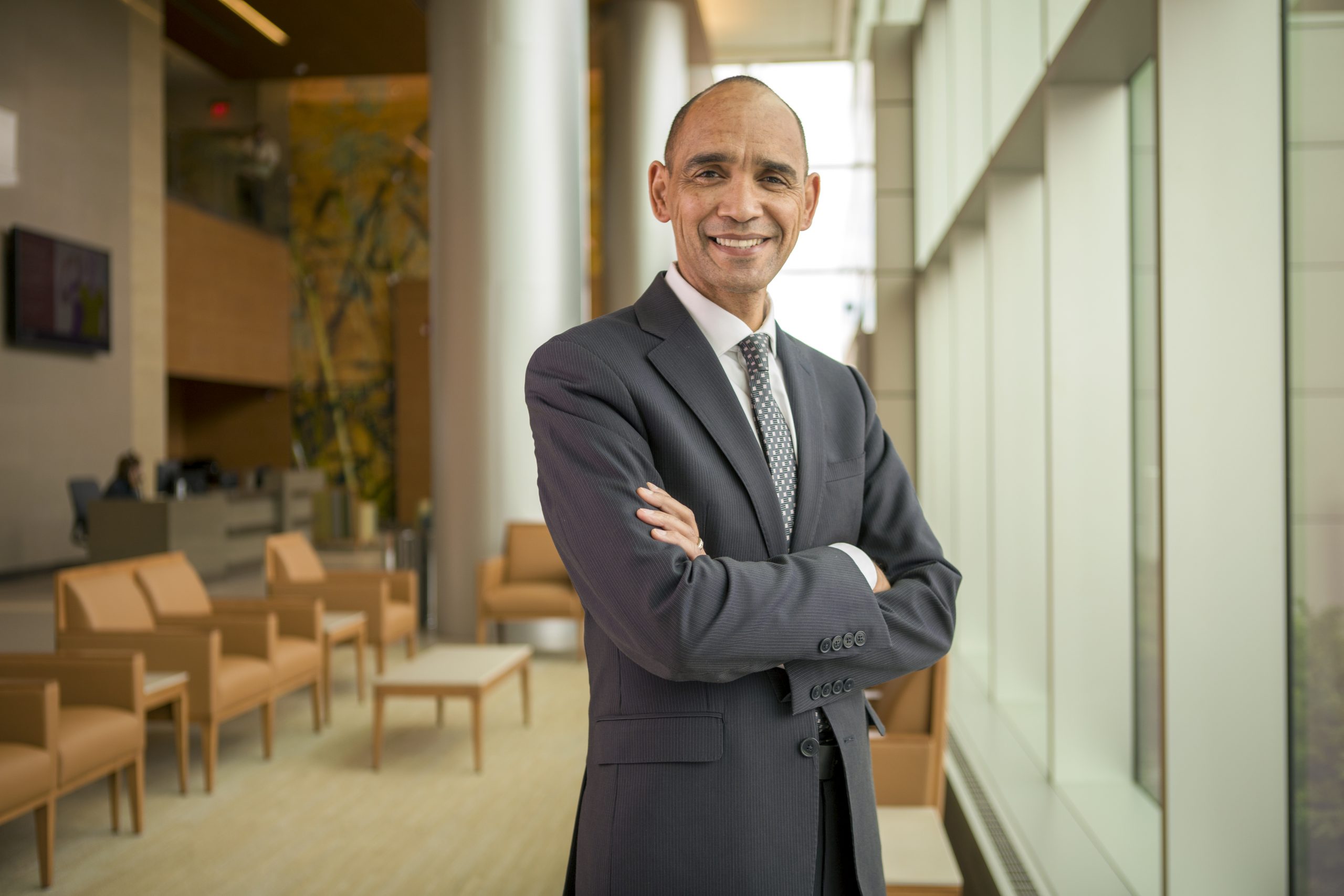