In FY 2021, the School of Dental Medicine received its highest-ever level of research funding and retained its coveted number eight research ranking in total direct funding from the NIH.

The UConn School of Dental Medicine continues to excel with strong research rankings and robust funding levels. For Fiscal Year (FY) 2021, the School received its highest-ever level of research funding and retained its coveted number eight research ranking in total direct funding from the National Institutes of Health (NIH). These rankings are published annually by the Blue Ridge Institute for Medical Research, based on NIH data. 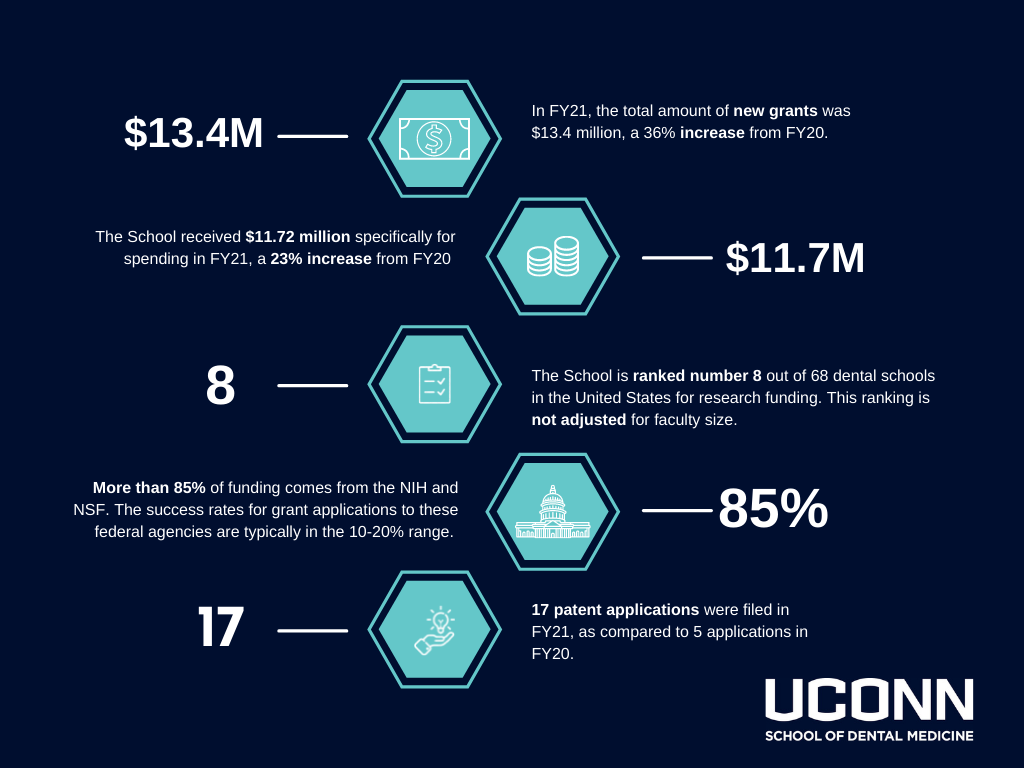 The School achieved its highest-ever level of research funding in multiple ways, including $13.4 million in new grants (for all years of the grants)—a 36% increase compared to FY20. For funding to be spent in FY21, the School received $11.72 million—a 23% increase from last fiscal year. The number of extramural grant submissions also doubled over the past few years, from 46 in FY17 to 94 in FY21.

“This large increase in research funding is evidence of significant growth in our research activity, which in turn leads to generation of new knowledge and provides training opportunities for the next generation of researchers,” said Dr. Rajesh Lalla, associate dean for research. “It demonstrates the excellence of our faculty, trainees, and staff who contribute to conducting and supporting research.”

The ranking of NIH funding—number eight out of all 68 dental schools in the United States—is especially significant because the ranking is not adjusted for faculty size. The School of Dental Medicine has a relatively small faculty size compared to the schools ranked higher on the list. Additionally, more than 85% of the School’s research funding comes from the NIH and the National Science Foundation (NSF). Success rates for grant applications to these federal agencies are typically in the 10-20% range.

“Our successes and growth in research productivity is a reflection of the talent and expertise of our faculty, students, residents and staff, as well as our continued commitment to the advancement of science and dissemination of new knowledge,” said Dr. Steven Lepowsky, dean of the School of Dental Medicine. “These achievements are even more significant in an increasingly competitive environment for extramural funding.”