'UConn is delivering on its promise to promote student success, economic inclusivity, and life-transformative education'

A UConn education provides its students a return on investment that’s as strong or better than many other top U.S. public universities, eclipsing most institutions against which it competes head-to-head to recruit top students, according to new data.

UConn also surpasses most of those direct competitors in measures of students’ economic mobility, which assess whether an institution is accessible to low- and moderate-income students and serves them well enough that they can climb the economic ladder.

Combined, the data from two recent independent studies present UConn as a better long-term financial choice for its students than many other institutions they might have considered, and as a place that makes those opportunities accessible to families across the economic spectrum.

A UConn education is also delivered at a good value to Connecticut taxpayers: UConn provides its high-quality education at a lower per-student cost than many other top institutions, and has kept its administrative ranks lean for more than two decades.

A UConn education provides more than $1.52 million in return on investment over a 40-year career. — Source: Georgetown University's Center on Education and the Workforce

She also noted that UConn is number one in the country when it comes to the time in which students earn their degrees: an average of 4.1 years, a place shared with four other public research universities in the country, according to the UConn Retention & Graduation Task Force’s most recent analysis.

“That means that the cost associated with attending UConn is much lower than at other institutions,” Maric says. “While it’s gratifying to see that the data confirm a strong return on investment for a UConn education, UConn’s economic mobility ranking also shows we are succeeding in the important work of ensuring students at all income levels can share in those benefits.”

The ROI figures come from a recent study by Georgetown University’s Center on Education and the Workforce, whose analysis of more than 4,500 institutions found that a UConn education provides more than $1.52 million in return on investment over a 40-year working career.

That’s comfortably in the range of ROI of several other high-ranking public universities nationwide, including some with significantly more resources.

Notably, UConn’s ROI is also higher than 10 of the 13 other public and private institutions against which UConn most directly competes for enrollment, which UConn determines based on surveys in which applicants share where else they applied or enrolled. 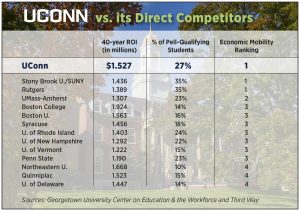 Another recent study, this one by the Third Way research organization, puts UConn in the top tier of schools offering strong economic mobility for students with fiscal constraints.

That tier encompasses the top 20% of institutions that enroll large percentages of low- and moderate-income students, as measured by qualifying for federal Pell grant aid; and whether they provide an education that prepares those students to move up the economic ladder.

“Students appear to be gravitating toward more certain and positive outcomes during the challenging and uncertain times we live in today,” says Nathan Fuerst, UConn’s vice president for enrollment planning and management. “UConn’s affordability and value, paired with a vibrant, challenging and exciting academic and social experience, rises to the top of many students’ lists as a result.”

The data from the two studies and university analyses also show:

• Of the three direct competitors that produce higher ROIs, none serve low-to-moderate income students as well as UConn, despite two of the three spending more on academics per student. All three are private institutions and are in the third or fourth tiers for economic inclusivity, compared to UConn, which is in the first tier.

• While two other institutions join UConn in the highest tier for economic mobility, their students receive significantly lower ROI over a 40-year career than they would with a UConn education.

• UConn’s strong ROI and economic inclusivity have been achieved even as it has increased enrollment and kept administrative levels relatively constant. The University’s student body has grown by 10,000 since 1998, but administrators still account for only 2.2% of the workforce, as they did then.

“Our graduates are doing very, very well relative to the graduates of other top institutions in the nation,” Lloyd Blanchard, UConn’s interim vice president for administration and chief financial officer, told trustees at a recent meeting.

UConn’s strong showing in economic mobility reflects its commitment to student inclusion and success: About 27% of UConn’s students qualify for federal Pell grants, and about two-thirds of undergraduates receive financial aid in the form of grants and scholarships they don’t have to repay.

The strength in ROI and economic inclusivity are important factors in UConn’s commitment to providing life-transformative education.

At the same time, the University has established itself on the national and global stage as a research powerhouse with high-achieving faculty receiving record grant funding; home to a talented and diverse student body whose members graduate faster than the national average and launch strong careers; and an economic driver for the state of Connecticut.

UConn also continues to build a reputation for excellence, as its application numbers have hit record highs despite competing for a shrinking number of undergraduate and graduate students nationwide.

However, UConn is bucking those trends: A record number of 4,075 first-year students started the academic year at Storrs last month, and another 1,750 enrolled in the regional campuses, all having competed in a record pool of more than 43,000 applicants.

“This demonstrates strong interest and trust in the quality of education that UConn offers,” Maric says.