Anthropology professor Daniel Adler co-directed excavations at an archaeological site in Armenia that documents the earliest human occupation of the area, and may be more than 1 million years old.

In July 2018, UConn associate professor of anthropology Daniel Adler and Keith Wilkinson, University of Winchester, UK, co-directed excavations at an Early Pleistocene archaeological site in northern Armenia known as Hahgtanak-3. The site documents the earliest human occupation of Armenia, and may be more than 1 million years old. 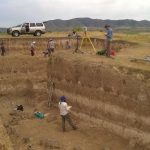 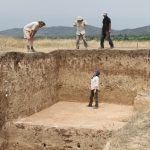 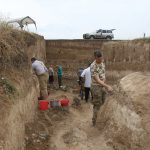 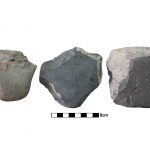 During the excavations, participants from five countries unearthed stone tools from deep layers at the site, and sediment samples were collected for dating and environmental reconstructions.

The goals of this research are to excavate highly contextualized archaeological, chronometric, and paleoenvironmental data with which to test hypotheses about the timing and nature of early human expansion into the region, the technological abilities of these groups, and how changing climates and environments may have affected this process.

Stone tools are some of the earliest and most easily identifiable artifacts made by humans, Adler says, and are made by flaking off smaller pieces of stone with a hammerstone. It is thought early humans used these tools for various purposes, such as cutting meat and plants.

By studying these tools, the researchers hope to learn about the early humans who made and used them, and understand more about their technological evolution. Dating of the sediments in which the tools were found is done by colleagues at the University of Glasgow, UK.

In July 2019, Adler’s graduate students and an international team of specialists will be joined at Hahgtanak-3 by a group of UConn undergraduates enrolled in the Archaeological Field School in Armenian Prehistory, an Education Abroad program that trains students in archaeological excavation and recording methods.

Funding for the 2018 field season was provided by the Leverhulme Trust Leverhulme Trust, UConn’s Norian Armenian Programs Committee, and UConn’s Office of the Vice President for Research.