UConn is one of just 11 universities to win the distinction of being a Platinum-level Skin Smart Campus for its dedication to preventing skin cancer.

Skin cancer is the most commonly diagnosed cancer in the United States and melanoma, the deadly form of skin cancer, is one of the most common types of cancer among women, especially young women. With its official designation this month as a Skin Smart Campus, UConn has joined an exclusive group of colleges and universities that are committed to the fight against skin cancer.

UConn is just the eleventh institution to earn status as a Platinum-level Skin Smart Campus from the National Council on Skin Cancer Prevention, which seeks to prevent skin cancer through education, advocacy, and raising awareness. The designation commits UConn to providing a safe and healthy learning and living environment that protects public health and welfare by prohibiting indoor tanning on campus and in college buildings.

“At UConn, there was a lot of interest and enthusiasm at the highest levels, which is fantastic because skin cancer is one of the types of cancer that tends to be dismissed,” said Sherry Pagoto, a professor in the Department of Allied Health Sciences and director of the UConn Center for mHealth and Social Media. “Melanoma is the most common cancer among women in their early twenties, so there’s a huge opportunity here for universities to encourage prevention. We have the opportunity to get a generation of women to avoid using tanning beds.” 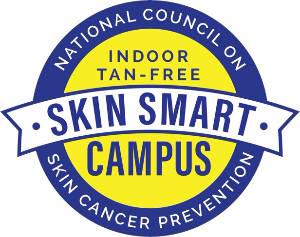 UConn has also agreed to make available educational materials that focus on the risks of ultraviolet (UV) exposure as well as skin cancer prevention practices. Those materials are currently available to students, faculty and staff online through Student Health and Wellness at studenthealth.uconn.edu/skinsmart.

“UConn is committed to promoting the health and safety of all members of our community,” said President Thomas C. Katsouleas, who signed the University’s memorandum of understanding, making the Skin Smart Campus designation effective on November 1. “As a newly recognized Skin Smart Campus, we are joining with other universities around the country in taking steps to reduce indoor tanning, which is directly associated with increased risk of melanoma and other skin cancers.”

In addition to its national recognition as a Skin Smart Campus, UConn is also receiving two free sunscreen dispensers from the nonprofit advocacy group IMPACT Melanoma – which will be matched by a donation of two additional dispensers from Pagoto’s lab, for a total of four new dispensers – and a one-year supply of sunscreen to stock them.

UV exposure is the most preventable cause of skin cancer. While exposure to UV rays from indoor tanning beds is particularly carcinogenic – more than 400,000 cases of skin cancer may be related to indoor tanning in the United States each year, according to a 2014 meta-analysis – it’s also completely avoidable. As 16 states have enacted laws prohibiting use of indoor tanning before age 18, Pagoto said, the college years have become the next focus of prevention efforts.

Additionally, as noted in The Surgeon General’s Call to Action to Prevent Skin Cancer, people who begin indoor tanning at younger ages seem to have a higher risk of developing skin cancer in their life due to the cumulative effect of exposure over time.

“Bringing universities into the issue is a priority because if we can get people to avoid picking up the tanning bed habit before the age of 25 they will most likely never pick up the habit,” Pagoto said, who was the lead author of a 2015 study that documented the prevalence of tanning salons and indoor tanning options on and around college campuses. Her study led to the launch of the Skin Smart Campus initiative as well as a strong push for universities to take a leadership role in preventing indoor tanning bad use among college students.

Pagoto said she is currently working in consultation with Student Health and Wellness to determine the most accessible placements on campus for the new sunscreen dispensers, which operate similarly to the more-common hand sanitizer dispensers now available in many public spaces.