People often believe that Alzheimer’s disease is part of “normal aging.” This is not true. Alzheimer’s is a disease and the most common type of dementia.

Eleven years later he released a letter to the American people announcing his diagnosis with the disease from which he passed in 2004.

Fifteen years later, 5.8 million Americans are living with Alzheimer’s disease, the 6th leading cause of death. There continues to be many questions and misconceptions about Alzheimer’s.

Experts from UConn Health share their perspectives to help answer several key questions about the disease and its common misconceptions.

What is the difference between Alzheimer’s and dementia?

Dementia is a broad term that describes a variety of diseases in which people suffer from memory impairment that gets worse over time and affects their ability to function in their daily lives. Alzheimer’s is the most common type of dementia according to Dr. Kristina Zdanys, geriatric psychiatrist at UConn Center on Aging at UConn Health.

People often believe that Alzheimer’s disease is part of “normal aging.” This is not true. Many people forget where they put down their glasses, and often that is nothing to worry about. Losing your glasses occasionally is not Alzheimer’s. When someone has Alzheimer’s, forgetfulness increases to the point where it affects the person’s ability to do their daily routine (such as paying the bills, managing their medications, or cooking a meal). That is not normal aging, according to Zdanys. 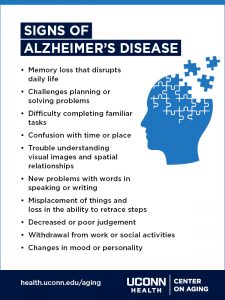 What are the symptoms of Alzheimer’s disease?

Symptoms of early-stage Alzheimer’s include memory loss that interferes with daily activities, difficulties with problem-solving, losing or misplacing objects, and changes in mood and personality.

As Alzheimer’s progresses, the brain’s ability to control language and reasoning becomes impaired. Persons might have problems recognizing family and friends or performing multistep tasks such as getting dressed.

How is Alzheimer’s disease diagnosed?

To diagnose Alzheimer’s, doctors evaluate your signs and symptoms and conduct several tests.

An accurate diagnosis of Alzheimer’s dementia is an important first step to ensure you have appropriate treatment, care, family education and plans for the future.

The Center on Aging at UConn Health is a multidisciplinary clinic that provides primary as well as consultative care. The team of board-certified geriatricians, geriatric psychiatrists, and neuropsychologists provide comprehensive, individualized care for aging adults.

According to Dr. Patrick Coll, medical director of senior health at UConn Health, there are lifestyle changes you can make to help protect yourself from the devastating effects of Alzheimer’s disease.

“Good brain health and the prevention of Alzheimer’s disease can be helped by following many of the same recommendations that promote a healthy heart, such as eating a heart-healthy diet, not smoking, keeping high blood pressure and cholesterol under control, and physical exercise. Exercising your brain and remaining socially engaged can also promote good brain health and decrease your chances of getting Alzheimer’s disease when you are older,” says Coll.

Is there any hope for a treatment or cure in the future?

“We all have a hope that in 5 to 10 years with academia collaborating with pharmaceutical companies we will indeed have an effective drug to finally treat Alzheimer’s disease,” says Yan.

The Yan lab focuses on the study of how Alzheimer’s disease patients develop the pathologies in their brain and explores therapeutic treatment for this most common neurodegenerative disease.

Yan and his lab are currently testing the power and safety of several promising molecules to target BACE-1 and inhibit its biological function to prevent or stop further β-amyloid growth. They are also gaining insight into the role of reticulon 3 protein (RTN3) and its interacting proteins such as ATG9A in the formation of dystrophic neurites in the brain which can lead to memory loss, dementia and Alzheimer’s disease. The Yan lab is also exploring a promising treatment that aims to enhance neurogenesis to replenish the loss of brain cells in Alzheimer’s and other neurodegenerative diseases.