Doctoral student Megan Chiovaro has learned a lot about people - from working with honeybees.

You can hear the chickens clucking over the constant hum of the traffic that speeds along the highway overpass, its massive concrete façade visible through the thin canopy of trees.

The trio of bleating goats make themselves known over the din as well, though you’ll have to wander away from the nearby strip mall, slip behind the brick houses, and pass by the outdoor gardens and the indoor greenhouses to find their cozy shed, tucked away just next to that same highway overpass.

But on a comfortably sunny August afternoon on the edge of Hartford’s Keney Park, they take a backstage to another constant hum in the area – the sound of a hundred thousand honeybees, all residents of the Keney Park Sustainability Project, all going about their daily work as their yellow-painted wooden hives are carefully opened and the frames holding their expertly constructed hexagonal combs are removed and individually inspected.

“This is a beautiful frame,” says Megan Chiovaro, a graduate student with UConn’s Department of Psychological Sciences, as she holds a black plastic rectangular frame covered in writhing, crawling, buzzing honeybees up to her smiling, veiled face.

“It’s all brood, all babies,” she says, pointing with a blue-gloved finger to the waxy yellow caps covering most of the frame, her voice full of palpable admiration. “Wow. It’s so beautiful.”

She moves slowly, methodically, expertly, as she handles the boxes and frames, dressed in a long-sleeved white shirt and hat, with a hooked metal beekeeper’s tool in hand. She opens each of the four boxes, dousing the top with fragrant smoke meant to calm the bees and send them deeper into the hive. She scrapes away extra, unwanted comb that the bees built – called burr comb – from the tops of the frames, then lifts them gently out, checking for honey, for brood, for unwanted mites, and for the presence of a healthy and active queen bee in the hive.

“I like to say I have hundreds of thousands of pets,” she says. “If someone asked me five years ago if I would be this close to a hive, I would have never thought today I’d be sitting here.”

Chiovaro has been keeping honeybees for nearly that long, and she helped to set up the hives in Keney Park two years ago through a partnership with the Keney Park Sustainability Project and UConn’s Service Learning Initiatives. She’s conducted seminars on beekeeping and sustainable practices at the park for members of the local community in Hartford, and she regularly comes to check on the health of these hives.

The nonprofit organization relies on the expertise of partners like Chiovaro, says Herb Virgo, executive director of the Keney Park Sustainability Project, which conducts a myriad of programs involving urban agriculture, sustainable living, and community engagement out of its location on Windsor Avenue.

For Chiovaro, who says she’s been volunteering for various things her entire life, the Keney Park bees are a labor of love.

But honeybees in general have also become an integral part of her research and career path.

“I came into UConn not knowing I was going to study bees,” she says. A student in the Perception, Action, Cognition Division’s Ecological Psychology doctorate program, Chiovaro’s research with honeybees has earned her a few affectionate nicknames on the UConn Storrs campus – including “The Bee Lady,” “Queen Bee,” and “Mother Bee.”

But, why would a psychologist study honeybees?

“My research focuses on collective intelligence – how a group can work together successfully without guidance from a leader,” Chiovaro says. “Honeybees are a group that work together, they communicate. But the difference is that honeybees do it very well, and humans are not always as successful while working together in groups.”

Honeybees communicate through a combination of vibrations, movements, noises, and pheromones. Their communication signals have specific meaning – telling other bees to get to work, alerting to the location of a profitable food source, or warning of a danger to the hive. While researchers don’t exactly know how honeybees developed their complex communication systems, they do know that bees successfully self-organize and create a division of labor within the hive without any direction from their queen.

“We have a lot to learn from these insects,” Chiovaro says. “They work together seamlessly, and human groups – we don’t always do that. So, there’s a lot that we can adapt from them to make ourselves better as organizations and as societies. My research, my goal, is to use the dynamics and the ways that honeybees communicate and apply it to human groups to make us more successful.”

It’s not just an abstract concept for her, either. In her own life, Chiovaro tries to act like the bees.

“I’ve found myself thinking about people and their context, what they’ve been doing, where they are in their lives, and then tailoring how I communicate with them in the way that I think they would then best understand,” she says, “because that is the way the honeybees do it. They are so selfless. They are so for the collective, they do everything for the colony. It’s their family. And so I try to be a team player and work like them, in a way.”

While honeybees will fly up to six kilometers in search of pollen and nectar, the four active hives are just the start of beekeeping in Keney Park, says Virgo, who is working to establish more hives in strategic locations around the public park’s 693 acres. Awareness of the nonprofit within and outside the local community has been slowly growing, and projects like the addition of the hives – which increase needed pollinators in the urban environment while giving the organization a valuable product to sell: fresh, local honey – have helped to build excitement for the project’s future. 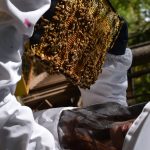 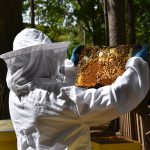 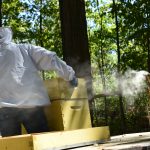 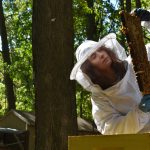 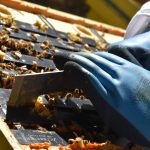 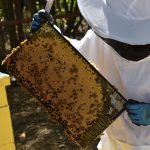 “Because we’re located in the most northern section of Keney, a lot of people still don’t know we’re here,” Virgo says. “But we’re working on projects in other areas, we’re building another community garden closer to the neighborhood and we’re working on a healing center, where we can bring all this programming closer to the neighborhood. For the community folks who are aware, they’re exited, they participate, they support us, and hopefully we can continue to grow that.”

“We hope everybody at UConn knows the level of engagement that we have with the University so that, long term, this site, this program, this park becomes kind of like an auxiliary site for education programs and partnerships,” he says. “We can always find something for a group or a student to help us out with – there’s so much going on with this project and in the park, whether it’s business, ecology, whatever the case, we have stuff that we can engage the student around.”

Chiovaro sees benefits that are both personal and professional in her Service Learning engagement with the Hartford community, facilitated by her work with the honeybees.

“I think a lot of times, in academia, in a graduate program, you get very wrapped up in your research,” she says. “You get very wrapped up in the statistics, and in making sure that you’re publishing papers, and you don’t really see the broader context of the world. I think that my experience here has really helped me ground the things that I’m doing and the results that I’m finding, and allowed me to see how they could really impact people’s lives.”

She continues, “It’s extremely rewarding. People in urban communities like this don’t get a lot of experiences in the outdoors. They often don’t get education about sustainable living. So, being involved in something like this, you really get to see the impact that you’re making on the community.”