One in four Americans age 65 and older falls each year making falls the leading cause of fatal injury and the most common cause of nonfatal trauma-related hospital admissions among older adults. Falls result in more than 2.8 million injuries treated in emergency departments (ED) annually, including over 800,000 hospitalizations and more than 27,000 deaths. […]

One in four Americans age 65 and older falls each year making falls the leading cause of fatal injury and the most common cause of nonfatal trauma-related hospital admissions among older adults.

Falls result in more than 2.8 million injuries treated in emergency departments (ED) annually, including over 800,000 hospitalizations and more than 27,000 deaths.

One out of five falls causes a serious injury such as broken bones or a head injury.  More than 95 percent of hip fractures are caused by falling and can be the most devastating of all – 25% of them will die within a year. After a hip fracture, sadly, statistics show that over 75% of older adults never return to their pre-fracture level of daily function and mobility.

When Susan Lagassee, 73 of Hartford, fell and broke her hip it was a significant wake-up call for her. “I worried it’s the beginning of the end,” she says. So when she was offered the opportunity to participate in the STEP-HI study (Starting a Testosterone and Exercise Program after Hip Injury) at UConn Center on Aging, she signed up.

Dorothy “Dot” Graves, 98 years old from West Hartford, also joined the study after she fell and broke her hip while getting out of the car. “I received the literature from the program and read of a 94-year-old who successfully completed the program and became stronger, and thought ‘this is for me’.”

The study is working to improve function in women who’ve broken a hip. When an older woman sustains a hip fracture, standard physical therapy sometimes is not enough.  The STEP- HI study is a multi-site clinical trial, researching the benefits of exercise training and hormone replacement on a hip fracture recovery in older women.

As one of the clinical trial’s lead investigator at the UConn Center on Aging, Dr. Jenna Bartley explains, “As we age, we lose muscle mass and strength, and especially after an injury, it’s hard to regain these losses.  Older women after hip fracture may just need an extra boost to get them back in their pre-fracture ability level.” 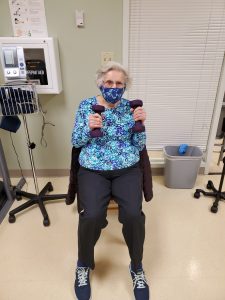 Graves who lives independently has been participating in the six-month program two times a week since July and is sad to see the program end for her. “The program is wonderful and the people running it are amazing,” says Graves. “It definitely made a difference, I have muscles now.”

The STEP-HI clinical trial is currently enrolling women over the age of 65 who have fractured a hip within six to twenty weeks.  Study participants are randomly assigned to one of three groups.  Two groups participate in supervised exercise training and are asked to apply a gel, daily while a third group is given exercises to do at home.

In addition to the exercise training, all participants receive free vitamin D and calcium supplements, a mammogram, bone density tests, and transportation to and from UConn Health.

“On top of all these benefits, participants love the added value of being watched closely by a team of healthcare professionals throughout the study,” says Heather McAbee-Sevick, MS, the study coordinator and exercise interventionist at UConn Center on Aging.

Lagassee, who was already in good shape found having the exercise interventionist is a big plus.  “They provide full one on one attention for the entire session,” she says.   “They are very encouraging and accommodating and will work with all situations to make sure you can do the program.”

During the COVID-19 pandemic, the isolation of older adults is at the forefront of our minds.

Participation in the study has allowed the exercise interventionists to interact with participants, stay abreast of their medical needs, triage with their medical providers, and also strengthen them physically post-surgery.

“To me, the social aspect is as equally important as the physical rehabilitation after such a traumatic injury. The added benefit of triaging with their doctors during days where telehealth has been the only option for a population that is not accustomed to technology, has been extremely helpful and beneficial in their overall recovery as well,” says McAbee-Sevick.

“I never had any qualms about going during the pandemic, they were always so safe,” says Graves.

Both women’s time in the study is concluding soon, and they both say they will miss it.

“I hope others are made aware of the program and take advantage of it,” says Lagassee.

“It’s so wonderful, I can’t say enough about the program,” says Graves. “You get to know everyone and they are so great, even the drivers.”

“We have been so lucky to have the sweetest women in this study. It has made our ‘job’ feel like visiting family instead of working,” says McAbee-Sevick. “I miss them dearly once they’re finished!”