After earning a master’s degree in clinical psychology from Duquesne University, UConn social work assistant professor Nathanael J. Okpych worked as a therapist in high schools and in a community-based program for youth with mental illnesses in the criminal justice system where he encountered many youth who were in or had been in foster care.

“That professional experience really put me in touch with the trauma and the difficulties many of these youth encounter. But one of the things that amazed me is just how strong and resilient they are,” Okpych says. “Some of these youth have gone through more trouble than adults have experienced in their whole lives. But they’re still there. They’re still fighting.” 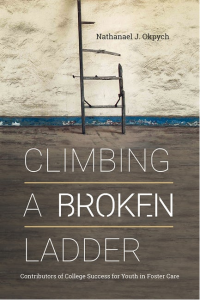 Okpych also worked with young people in education settings as a middle-school teacher, an Upward Bound SAT instructor, and a college dorm director. He went on to pursue a Master of Social Work degree, and reading “astounding” statistics on foster youth in higher education pushed him to pursue his Ph.D.

Okpych’s recently published book, “Climbing a Broken Ladder: Contributors of College Success for Youth in Foster Care,” draws from “The Midwest Study” of a representative sample of 732 foster youth that Okpych was involved in, led by Mark Courtney of the University of Chicago. The book details the factors that lead to fewer than one in ten foster youth completing a college degree despite having college aspirations similar to their peers and suggests policy and practice that could improve their success.

Okpych spoke with Julie Bartucca of the UConn 360 podcast on the topic. This interview has been edited for length and clarity.

What are some of the factors behind so few foster youth completing two- or four-year college degrees?

You can think about this in different steps, right? First there is the step of going to college in the first place. And then the second step is persisting through college and then ultimately graduating. Our study found that some of the factors that decreased their likelihood of going to college were things like academic preparedness in high school, issues with mobility while they're in foster care, the number of foster care placements they were in.

And then interestingly, once youth are in college, when we're looking at their chances of ultimately graduating and earning a degree, I found that youth who are parents, youth that had to work extra hours to pay for their bills, and the number of economic hardships that youth faced in college — real world difficulties, everyday taking-care-of-the-finances difficulties, and parenting responsibilities, are things that drove down their likelihood of persisting and ultimately earning a degree.

About half of the youth in the study ever set foot inside of a college classroom and among those who entered college, less than a quarter ultimately earned a college degree. Taking a step back and comparing foster youth to youth that didn't have foster histories, youth in foster care are about one-fifth or one-sixth as likely to earn a college degree by their mid-20s.

What can be done to address this issue?

When we're looking at getting into college, one of the issues is the amount of instability that youth experience switching from one placement to another. Some youth also have to change schools, change communities.

It's a huge disruption to their social connections, and you might be in a high school class in one school, then it takes two to three weeks to get set up in the next school, and that school doesn't offer that class so those credits are lost. One of the major target areas is decreasing the disruption to foster youths’ educational experiences when they have to switch placements.

Many foster youth may not have family members or community members that have gone to college, so college is kind of an abstract thing to them. Over 80% want to go to college, but in terms of having people accessible to them who can help them with the very concrete steps of preparing for college, many foster youth don't have a robust network. One of the recommendations is to make transformations to the child welfare department, such as contracting with agencies that specialize in college advising or developing an in-house program, having a child welfare worker who specializes in assisting youth who want to go to college to prepare for college —  completing financial aid applications, getting all their ducks in a row academically, searching for colleges where they might have a better chance of succeeding and persisting.

And then once they’re in college helping them persist: one thing is meeting the financial needs of youth in foster care. There are many policies out there that provide money for foster youth to help with college. Some are generally available, like Pell grants; some are specific to foster youth. Making sure that youth know about these resources and are getting the resources they qualify for is huge.

Another is linking them to support on campus that will ensure that they're academically ready to do well in their classes.

One of the really big findings in the study was that of all the youth that had entered college, about half didn't make it through their first year. They left college and never returned. So that first year is critical,  kind of all hands on deck, helping them to acclimate to college and making sure they have links to consistent mental health services that are trauma-informed to help address their trauma.

What would you advocate for on a national level to improve these outcomes?

Right now in about 20 states, once you've hit your18th birthday, foster care ends. In about 30 states, the age limit is 21, but again once you've hit their 21st birthday, the state child welfare agencies and foster agencies do not have a responsibility to provide them with housing or any of the usual supports that a parent would help out with.  Imagine that on your 21st birthday. It's a very abrupt transition where you may find yourself homeless or out of resources.

There was a law that was passed in 2008 and then came into effect in 2010 that basically gave states the option to extend the foster care age limit from 18 to 21. So I think one step is for the two in five states that end foster care at 18 to sign onto extended foster care.

We also need to think about the age limit of 21. Realistically, is age 21 a time when we think youth are ready to be on their own? With students who are successful in college, that's right in the middle of their college career.

There are also grants specifically for youth in foster care called an Education and Training Voucher (ETV). When it was established in 2002, the amount foster youth can receive is $5,000 per year to help out with college expenses.

Fast forward 20 years: The amount that foster youth can receive to help out with college? $5,000. The cost of college has skyrocketed. The ETV has not kept pace with inflation. Another suggestion would be to change the law so that this ETV keeps pace with the rising cost of college and inflation in general, like how Pell Grants are adjusted.

And then third thing is, we've been seeing in the past 20 years, especially the last 10 years, a flurry of college campuses have developed support programs specifically designed for youth in foster care. Some also serve other vulnerable populations, such as homeless youth.

Well over 200 campuses around the U.S. have these programs, and there's a lot of variation in them in terms of what supports they provide. Many provide one-on-one advising and counseling, linking to services. Some provide emergency funds, such as book funds and so forth. But one of the problems is that most of these programs are not funded by public dollars.

They're funded by a cobbling together of private dollars, maybe some public dollars, so their sustainability from year to year is in question. Having a steady stream of stable funding from the federal government that would help to establish these programs at campuses foster youth commonly attend would be a huge step to help them find community and be linked with resources that could help them persist.

Listen to the UConn 360 podcast interview: