A DIY air filtration device assembled by fifth graders in Hartford makes its way to Washington, thanks to a cross-campus effort

Creed’s patients in UConn Health’s Multiple Sclerosis Center are among the more vulnerable to severe illness from COVID-19. Motivated by her role as both a clinician and a parent, last year she initiated a cross-campus public health initiative to get what are known as “Corsi-Rosenthal Boxes” into public school classrooms.

The boxes are an uncomplicated combination of easily obtained supplies that can be assembled in minutes. The components — a box fan, pleated air filter panels, cardboard and duct tape — add up to less than it costs to travel to Washington, D.C., where Creed presented members of the Biden administration’s Office of Science and Technology Policy (OSTP) a DIY air purifier by the UConn team and Hartford school children.

On September 9 she and UConn School of Engineering’s Associate Professor in Chemical and Biomolecular Engineering  Kristina Wagstrom visited a fifth-grade science class at Hartford’s Noah Webster Microsociety Magnet School, where they presented a STEM lesson that included the assembly of two DIY purifiers.

One, decorated in the school’s color, red, stayed in the classroom; the other, decorated as “Air Force One” and signed by the class, would be on its way to the White House the next day.

“It was an incredible opportunity for our team to showcase this important intervention made by Hartford public school students to the Office of Science and Technology Policy and gift ‘Air Force One’ to the team within the executive office of the president,” Creed says. “It was wonderful to see the children’s STEM lesson come to life. The unit is inside the Eisenhower Executive Office Building, and we hope it will make its way into the West Wing for the president and first lady to appreciate.”

The DIY air filtration kits have been shown to be comparable to manufactured portable HEPA filters.

“It was great to see how excited the students were to work on something that would have real impact,” Wagstrom says.

Creed was honored to be gifting the device to the White House OSTP alongside a major advocate of the DIY Corsi-Rosenthal intervention, Kimberly Prather, Distinguished Professor of Atmospheric Chemistry at University of California San Diego (UCSD) and the Scripps Institute of Oceanography. Members of President Biden’s OSTP accepting the gift were Kimmerling, Dr. Georgia Lagoudas, senior advisor for biotechnology and biodefense, and Dr. Stephanie Guerra, assistant director for national security and biodefense.

In the spring, the Office of Science and Technology Policy held a webinar titled “Clear the Air of COVID-19.” Creed emailed the office to explain her indoor air filtration project, and in reply received an invitation to give a 30-minute briefing. As a capstone to the briefing, Creed, whose hometown is Washington, D.C., offered to bring a box made in the community by school children. The response to that was an invitation for a formal delivery to the White House.

“I was humbled that our work is being noticed at the federal level, and I am eager that our project will result in widespread improvements in public health through low-technology, low-cost, energy-efficient STEM projects that fifth grade school children can do,” Creed says. “It was heartwarming to know that a private citizen like myself can take an idea inspired by direct patient care and continue to push for the fruition of the vision that I have had, which is that these should be in every classroom in the state of Connecticut, if not throughout the country. It felt great to know that there’s federal support behind this initiative that we are working on.”

Support isn’t only coming from the federal government. In August the UConn Foundation announced a $300,000 grant funded through cryptocurrency from Balvi, an investment and direct giving fund established by Vitalik Buterin, the co-creator of Ethereum, to back the Indoor Air Quality Initiative. In May, Creed was recognized with one of UConn’s 2022 Provost’s Awards for Excellence in Community Engaged Scholarship.

The filtration systems are named for their creators, Richard Corsi, dean of engineering at the University of California-Davis, and Jim Rosenthal, CEO of Texas-based company Tex-Air Filters. Since last year Creed has been working to get them into Connecticut schools, and to teach students how to make them as part of a science and health lesson.

The students who helped create ‘Air Force One’ at the Webster Magnet School were impressed. 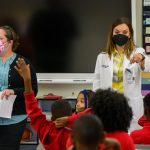 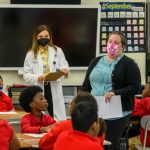 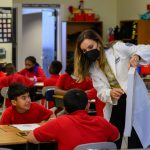 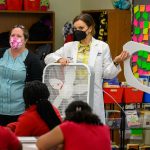 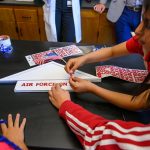 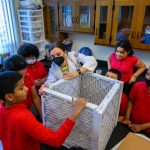 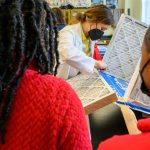 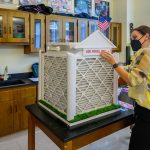 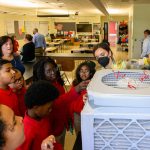 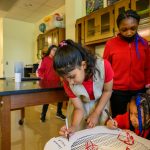 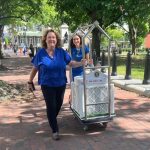 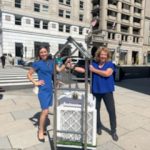 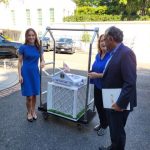 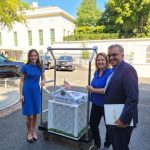 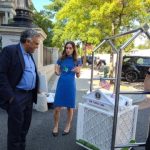 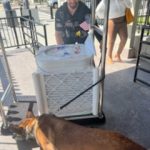 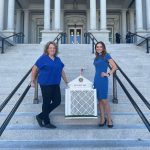 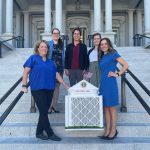 “We made an air filter that can help take away the germs and bacteria, and it’s really useful because a lot of kids got COVID now and earlier in the year,” says Elijah Ruiz, 10, of New Britain.

“It’s really cool that you can just get a few items that only cost a couple of dollars and make something that can make such a difference,” says Mia Lee, 10, of Manchester.

“It’s something that could be life-changing for everybody, and it can cure a lot of diseases, like COVID,” says Nayeli Rockwell, 10, of East Hartford.

What about the idea that something they helped make and put their names on would be going to the White House?

“Out of this world,” Nayeli says.

Instructions on How to Make a Corsi-Rosenthal Air Box