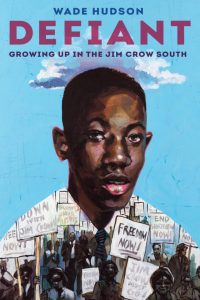 Growing up in the small, segregated town of Mansfield, Louisiana, Wade Hudson was influenced by two powerful forces: his nurturing Black family and community, and the wider world of systemic racism. In his moving and inspiring memoir for middle-grade readers and beyond, Hudson relates how both of those forces shaped him into becoming the civil rights activist, writer, and publisher he is today.

“With Defiant, author Wade Hudson brings to life the American history of racism and segregation for young readers who still live with its impact today,” says Kathryn Libal, director of UConn’s Human Rights Institute. “We’re honored to recognize Defiant with the 2022 Malka Penn Award and to help share its message of joy, fear, perseverance, social change, and the strength of family with a new generation of learners and activists.”

“Knowing our history, I believe, is more important today than it has ever been,” Hudson says. “Our world moves so fast now, and often those people and events that have shaped and molded us are forgotten. And there is an all-out effort by some to manage history for their own personal agenda. That is so unfortunate, because history explains who we are, how we have arrived at this place, and can help light a new path. Writing my memoir made this even more apparent to me.”

The Malka Penn Award is given annually to the author of an outstanding children’s book addressing human rights issues or themes, such as discrimination, equity, poverty, justice, war, peace, slavery or freedom. Named in honor of author Michele Palmer – who writes under the pseudonym Malka Penn – the award recognizes works of fiction, non-fiction, poetry, memoir, or biography and written for children from preschool to high school. Special consideration is given to stories about individuals who have been affected by social injustices and who, by confronting those injustices, have made a difference in their lives or the lives of others.

Hudson will formally accept the award in a ceremony on November 1, 2022, in Storrs and will participate in an event with Connecticut high school students on November 2. A professional development event with teachers will also be organized in conjunction with the ceremony.

In addition to Defiant, the Malka Penn Award Committee has recognized the following selections as its 2022 Honor Books:

Unspeakable: The Tulsa Race Massacre, by Carol Boston Weatherford and Floyd Cooper – Using a “once upon a time” story, this powerful picture book traces the history of African Americans in Tulsa’s Greenwood District and chronicles the devastation of a white mob’s attack on the Black community in 1921.

Rosie Loves Jack, by Mel Darbon – In this novel, Rose, a teen with Down syndrome, runs away to find her boyfriend Jack, who was born with a brain injury, after Jack is sent away and Rose’s parents forbid the relationship.

Areli is a Dreamer, by Areli Morales and Luisa Uribe – In this debut offering, author Areli Morales tells her own true story of immigration as a DACA recipient.

Born Behind Bars, by Padma Venkatraman – A gripping novel about a boy named Kabir who has been in jail since birth, as his mother serves a sentence for a crime she did not commit.

The Malka Penn Award for Human Rights in Children’s Literature is presented by Dodd Human Rights Impact, part of the UConn Human Rights Institute, which works through research, education, outreach, and engagement to foster a culture of human rights at UConn, in Connecticut, and throughout the world.